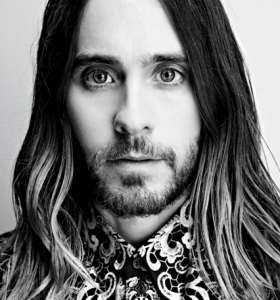 Jared Leto, long of hair and full of beard, is sitting in the lobby of The Bowery Hotel in Lower Manhattan in a chair so ornate it could be more accurately described as a throne. Tapestried cushions rest atop elaborately carved mahogany that pirouettes every which way, culminating in two lions’ heads, one on the end of each of the arms upon which his delicate hands currently rest. He surveys the dimly lit room: low-slung, velvet-covered sofas in rich burgundies and emeralds, assorted oriental rugs, low wood-beamed ceiling, leather-paneled walls, logs crackling in a massive stone fireplace, and, right in front of him, Deepak Chopra.

“You see that?” the 42-year-old says in a hushed whisper. “Deepak Chopra!” His excitement at the presence of the holistic guru is as visible on his face as it is audible in his voice. “Hold on, this is hilarious. I gotta tell my buddy.” He fires off a quick text. In this hotel—a place where celebrities seem to love to be interviewed almost as much as they love to sleep—Leto seems to be the only one focused on Chopra; everybody else is more interested in him. 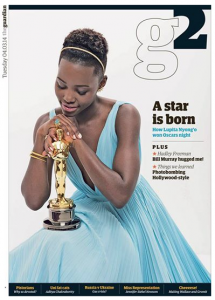 LUPITA NYONG’O SHINES IN 12 YEARS A SLAVE. GO SEE THIS MOVIE . LUPITA’S PERFORMANCE WAS SO CAPITVATING I WAS BROUGHT TO TEARS. CONGRATS ON THE OSCAR YOU DESERVE IT.